Today, I'm reached by the sad news that Adrienne Asch – a pivotal figure in bioethics, particularly known for her important contributions to the understanding of disability-based perspectives on bioethics, not least  regarding prenatal and other sorts of such reproductive genetic testing this world doesn't seem to ever get enough of – passed away this morning after having suffered bad cancer for some time. 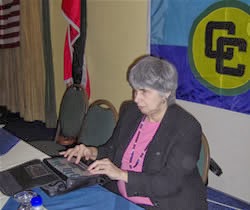 Confirmation of this last news is here, and the death notice has been traveling around Twitter and Facebook today, e.g., via my trusted Canadian colleague Udo Schuklenk, originating apparently from the account of the US National Federation of the Blind (where Adrienne was a prominent spokesperson): 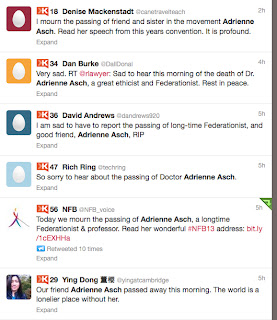 Addendum 2013-11-20: the day after, Yeshiva University has now officially posted an in memoriam.

The NFB also provides a link to this recent address that Adrienne gave at their convention this summer. It tells the tale of her way into bioethics and philosophy from human rights activist work, explains why the disability perspective is so important to bioethics, and why bioethics is so important to the disability movement, and ends by some pretty hard to chew food for thought for bioethicists, disabled people as well as anyone. Information about her writings and other accomplishments can be sampled via her webpage at Yeshiva University, where she held three parallel chaired professorships and one directorship. But don't take my word on her qualities as a scholar for it, here's a video piece where you can watch her in action talking on her special topic and judge for yourself:


My own contact with Adrienne came via her work on the disability based criticism of prenatal (PNT) and eventually preimplantation genetic testing (PGD), which still holds up as the most eloquently put, stringently made and thought-through devised version of that important critique, which she nevertheless continued to develop (she had a couple of pieces in the American Journal of Bioethics last year). I had myself been barely sniffing some of what Adrienne herself had the full grip on in my work on PNT and PGD in the 1990's, but when I came to writing my first encyclopedia piece om PGD a few years later, I was lucky and awed to discover it all so much better told by Adrienne and since then, her work has been my main reference on that topic whenever I need to provide one. Many years later, as part of a European Commission sponsored project on access to higher education for disabled people and charged with arranging a workshop on relevant disability-related research, Adrienne's name was the first one to come to my mind as speaker – and to my astonishment and joy she said yes. This was not so long time back, so this is how I remember her, as in the picture above: working! Because that she did and contributed everything I could have ever wished for, including cracking a joke when it was best needed. There were plans made then that we never got around to finishing (or even initiating), but she nevertheless honoured me by referencing my PNT work, and we shared space in this book, which came about thanks to Daniela Cutas, who worked with me in this project and was introduced to Adrienne at that same workshop.

Also, used to getting around as a blind person in New York City, when we asked before she came to that workshop if she needed any special assistance, she declined, albeit finding out that this thing with the cobblestones and the trams of Gothenburg and all made it slightly less manageable than maybe she was used to or had expected. Did she intentionally show anything of that? Never! I sensed then the divide of experience between us that probably made an ocean of difference in our angle of approach into our respective work – as much as we reached conclusions of close proximity. The divide between one who in virtue of physiological constitution has always enjoyed the default upper societal hand and the one who has always encountered a basic tweaking the other way around. In any case, this is my own personal connection to and remembrance of Adrienne; hardworking, insightful, generous, profound, funny and proud.
Upplagd av Christian Munthe kl. 22:41