Addendum 2014-04-25: I have updated some of the links and an image below, since Myriad has now updated its site. Still the same moonshine, just a slightly polished bottle.

The decision of a US federal judge to rule against the patenting of the BRCA-1 and BRCA-2 genes this Monday came as a pleasant surprise after a period of several years when the ability to patent human genome segments within the US legal context has been taken for granted. The ruling - a result of the efforts of the American Civil Liberties Union in conjunction with the Association for Molecular Pathology, individual women and others - was, of course, not welcomed by the commercial company Myriad Genetics, which during the period when it thought it had its patent rights secured has been pestering genetic health service providers in the US and around the world with their absurd claims (by implied threats of massive compensation suits) to world monopoly on predictive genetic testing for breast and ovarian cancer, alternatively the cashing in of handsome licensing fees.

Just a quick browsing of the Myriad Genetics website tells you that this company embodies just about everything bioethics researchers have been warning for in connection to the commercialisation of genetic testing since the late 1980's. The University of Utah Research Foundation that held the claimed patent together with Myriad - and that may be assumed to have been cashing in handsomely as a passive partner - should be held equally, if not more, accountable for this attempt to undercut sound business law, decent health care ethical standards, scientific progress and, not least, the health of those people belonging to families burdened by hereditary cancer, whose access to the preventive opportunities offered through genetic testing, and forthcoming advances of medical research, has been undercut. But back to the poverty of Myriad Genetics.

To take just one example of this moral morass, Myriad offers predictive genetic testing for hereditary melanoma - a disease for which the actual risk figure is never given at the Myriad website. Clicking this product, you are immediately told that "Changes in the p16 gene increase cancer risk, making a melanoma diagnosis up to 50 times more likely by age 50", which of course tells you absolutely nothing about what risk of melanoma you actually run before the age of 50 if you have the indicated genetic mutation, but for most people convey the impression that a mutation makes your risk of contracting melanoma before 50 an even game. Clicking further on to the page supposed to give you an in-depth background to hereditary melanoma, you're exposed to the following explanation. Take a minute or so to read it!

Having that horrible mutation must make for a helluva risk, doesn't it? Actually: no! Even considering that the people involved in Myriad are presumably not proper clinical doctors (if they were, AMA would have revoked their licenses by now, right? - I'm being charitable to the US medical profession here), but a bunch of lab rats and business executives, this is as close to actual fraud you can get without actually committing it in the strict legal sense. Remember that nice graph you just saw? Its Y-axis measures not the actual risk of contracting melanoma, but - again! - the change in risk compared to what risk of contracting melanoma you would run were you a random member of the general population. But the impression of the picture is not that - the impression is - once again - that if you carry the mutation you run a 50/50 risk. This message is cleverly conveyed by the sinister manner in which the general population risk figure is illustrated in the graph. That blue staple to the left of the tall purple one seems to reach up to the 1 of the Y-axis, right? It's 1% - right? Or something close to 1%? Actually, no! Have a closer look at the graph: 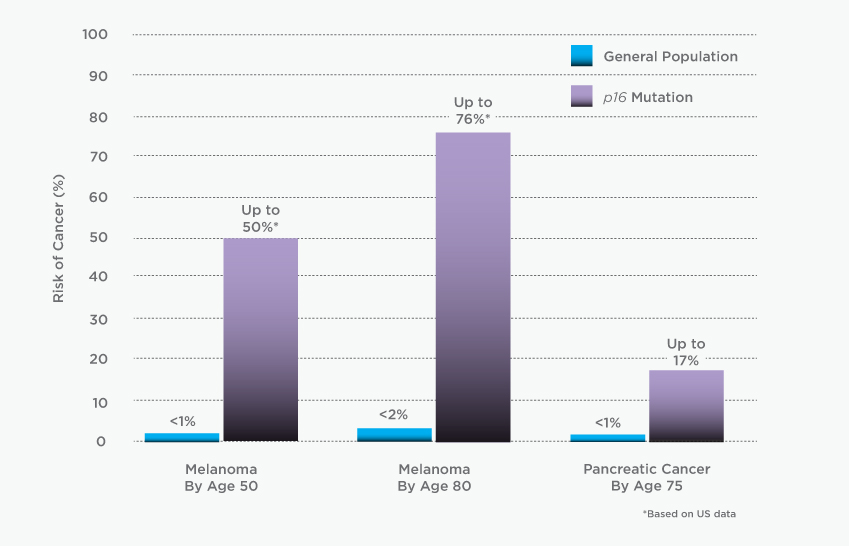 It is "< 1%" = "less than one percent", i.e.the risk is not given. It could be 0.99%, it could be 0.0000000000000000000001% For all we know based on the information provided, the 50% increased risk may thus equal a 0.0000000000000000000002% risk. Who knows? Obviously not Myriad Genetics - or can they really be consciously hiding highly relevant facts from potential customers??
Just to get some perspective, hereditary melanoma is what geneticists refer to as a multi-factorial disease, i.e. it occurs as a result of the interaction between several genetic mutations and the environment. The p16 test offered by Myriad targets just one among many different genes where a mutation may increase the risk for melanoma. This should be conveyed by the explanatory leaflets downloadable from here, but is not explicitly mentioned with one word and not in the presentation of this test either. So, suppose your test negative in a "comprehensive" Melaris test, what Myriad so handsomely calls "no mutation detected" - this is compatible with you carrying any of the other known genetic mutations of other genes that increase the risk of melanoma, what Myriad refers to as the risk being "not ruled out". It would be interesting indeed to have melanoma or cancer patient organisations trying out that concept in US civil courts (in which case, the University of Utah Research Foundation must, of course, be included in the lawsuit)!

Hopefully, the ruling against patenting actual genes or naturally occurring genetic mutations will undercut the sour-tasting business of Myriad Genetics and other similar companies. For one thing, as a legal precedent, it has the potential of putting a stop to attempts of making ethically well-motivated and responsibly handled predictive genetic testing offered by national health services - for instance for colon-, breast- and ovarian cancer - unnecessary expensive and thus accessible for more people at risk. From a moral point of view, it is thus most welcome. From a legal point of view as well, since what judge Robert Sweet argues in the ruling, "...the claimed isolated DNA is not markedly different from native DNA as it exists in nature, it constitutes unpatentable subject matter" has been obvious to anyone from the outset interested in applying actual patent law, rather than laying the foundation for a new branch of business. If Myriad has a unique procedure to detect DNA, they may patent that, of course, but do they? It remains to be seen, but my guess is that they use the same state of the art science and technology as does any molecular genetic research lab, and that they knew very well that their only chance to make a buck was attempting the patenting of DNA trick.

The only defense offered by Myriad's and the UURF's lawyer was that patenting genes promotes "innovation" and therefore promotes health. False. In fact, the patent claims on BRCA-1 and BRCA-2 has made medical research based on these genes that may lead to deeper understanding of the mechanisms of these forms of cancer, and thus to newer and better treatments, slower and/or more expensive. Patents have the potential of furthering innovation only when all of the basic scientific work has been done (until then, the scientific principle of openness, free sharing, access and use of information is far superior), and in the case of human genetics, identifying genes connected to disease-groups is just the first letter of the first name of that long process. When Myriad says "innovation" they mean business and so does - shame on them - the UURF.
Upplagd av Christian Munthe kl. 21:34 No comments: