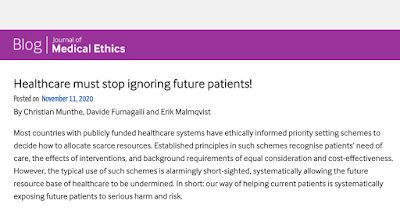 In a brand new blog post at the BMJ Journal of Medical Ethics blog, me, Davide Fumagalli and Erik Malmqvist write about a severe ethical challenge for healthcare systems that arises due to structural deficiencies in established systems for healthcare resource allocation:

Most countries with publicly funded healthcare systems have ethically informed priority setting schemes to decide how to allocate scarce resources. Established principles in such schemes recognise patients’ need of care, the effects of interventions, and background requirements of equal consideration and cost-effectiveness. However, the typical use of such schemes is alarmingly short-sighted, systematically allowing the future resource base of healthcare to be undermined. In short: our way of helping current patients is systematically exposing future patients to serious harm and risk.

As a remedy, we propose that a sustainability principle is added to estableshed ethical framworks that govern this central aspect of health policy. Read more about the challenge, as well as our proposal over at the JME blog!

So, I'm officially a published fiction writer (in Swedish) 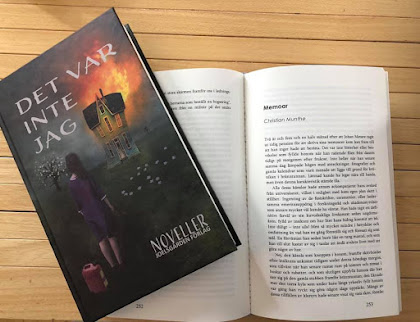 Not new to publishing books, or chapters in books, in my professional academic role, it nevertheless gives me immense pleasure to announce my official debute as a published fiction writer.

Just as with my activity in music, this is an artistic expression I have been engaging with since my youth, on and off. The last ten years, I have returned to it with more concentration, and found a form I feel works well in the genre of short stories and novellas (or long short stories).

Last year, I submitted one short story entitled "Memoir" (that's "Memoar" in Swedish) to a competition organised by the publishing house Joelsgårdens Förlag, on the vague theme of It wasn't me, and was lucky to be selected among the approxiamately forty entries included in an anthology volume entitled so, but in Swedish: Det var inte jag.

Naturally, the language of my fiction writing is Swedish, and so is that of all stories in this collection. If you happen to read Swedish and is interested in checking out this text, as well as other samples of my fiction writing currently in preparation for a forthcoming collection (as well as my musical activity), you can do so via my Swedish web page for literature and music.

Ethics Briefing for Covid19 Policy: Interesting Experience in Germany and a Plea for the Swedish Context


As the Covid19 pandemic continues to sweep the world, states are struggling to shape policies according to their epidemiological situation, resources and political possibilities. It is very obvious that all this policy-making has far-reaching ethical implications on many levels. It regards the identification of relevant values, the balancing of these in cases of conflicts, the pragmatics of implementing "ideal" solutions in a non-ideal world, and the normative aspect of deciding how competing institutional "rules" or "guidelines" for balancing values and implementing the outcome may be traded off in cases of tension.
All of this is, of course, a well-known aspect of the area of public health ethics, such as it has evolved over the last two decades. It regards both principal issues of what should be done, and issues about how this should be done to be done in an acceptable way. These issues are especially complicated due to the multi-sectorial and multi-level nature of public health, and the advanced and dynamic uncertainty under which all decisions on pandemic (and much other public health) policy needs to be taken.
One level is, of course, the implications for the healthcare system and, in effect, clinical medical ethics, of a far-reaching public health crisis, such as a pandemic. In this area, I was engaged, together with several colleagues with direct experience of this particular issue, in a working party that speed developed specific guidelines for ICU resource allocation for the Swedish context. However, albeit thorny and highly complex ethical considerations are recognised to be built into both public health and infectious disease policy in the Swedish central policy document in this area, the Swedish public health authorities have no organised way of dealing with the ethical tensions that necessarily appear on a daily basis. This inspired some of my colleagues – themselves not public health ethicists but recognising the need – to publish a plea for an ethics councel function  to be linked to the Swedish public health agency, Folkhälsomyndigheten. Such a councel has to involve different comnpetences, of course, besides public health ethics and relevant health science, not least advanced knowledge of (relevant) law, economics and politics.

Interestingly, I have been recently involved in exactly this type of endeavour related to Covid19, not in Sweden, but in Germany. It started when I was contacted, as one of several public health ethics specialists, to be part of an ad hoc ethics briefing to the Bavarian public health authorities with regard to sevaral of the type of basic value and norm.-conflicts briefly sketched above. The work was led from the Ludwig Maximilians University of Munich, where Verina Wild (bioethicist and public health specialist), quickly organised an international expert group to answer a set of questions formulated by the state authorities. This work (with links to the full briefing from the group to the Bavarian authorities) is described here. Additionally, the German federal Ethikrat has issued several statements on the ethical dimensions of the Covid19 policy response, and also there specific public health ethical competence is in place, eg. Alena Buyx.


In addition, German scholarly organisations in social medicine and public health have organised a Covid19 "competence centre" with specific working groups being coordinated for several areas, one of which is ethics. The coordinators for ethics is, once again, Verina Wild and her Munich colleagues Jan-Christoph Heilinger and Georg Marckmann, and they have invited a broad group of international scholars from the public health ethics field, among these myself. We have just finalised the first policy brief, which attempts to sketch in a few pages the complex landscape of consideration offered from a public health ethical perspective on pandemic policy. The final versionis now public via the competence centre website. A number of more specific briefs are planned, and will appear shortly.

I do believe that many states would do well to follow the German example. Besides the expertise of discovering, describing and analysing ethical and related legal and political dilemmas, relevant scholars are also able to articulate more clearly the logic of reasoning behind made policy decisions, thereby helping governments and agencies to better dodge conspiracy-like speculations of why certain decisions are made due to hazy explanations and arguments.  Among these, my own country Sweden, where there already exist a number of internationally recognized public health ethics scholars, besides myself, e.g., Bengt Brülde, Jessica Nihlén Fahlqvist, Kalle Grill and Erik Malmqvist, and additional legal scholarly expertise relating to the health policy area, such as Moa Kindström Dahlin and Ulrika Sandén.