As you may recall, I have now and again posted in connection to the project When Law and Hate Collide, where I and my assistant David Brax have been active since two years, collaborating with researchers at the law school of the University of Central Lancashire and psychologists and special education researchers at the Göthe Universität Frankfurt. These earlier posts are all assembled here, and among other things they link to videos from symposia arranged within the project in 2011 and 2012.

We are now in the final stages of this project and on tuesday we will hold the final and 4th of these symposia. This will take place on Tuesday, the 29th of January, starting 9 a.m. (CET) in Brussels, but for anyone who wants to follow it, it will be streamed on the web. To do this, 9 a.m. on tuesday, you simply click this link, and the live streaming should start. If there is a problem, wait a while and try again.

The program includes the following presentations:

Joanna Perry (Office for Democratic Institutions and Human Rights of the OSCE).

See you on the web, if not in Brussels!

Update 2013-02-17: I discovered today, that Theoria has chosen to make this review available for all, free of charge, so-called open access. To read it in full, follow the link given below, or access a pdf directly here.

My book on the moral basis of the precautionary principle that was published by Springer in 2011, The Price of Precaution and the Ethics of Risk, is very favorably reviewed over four pages in the latest issue of the renowned philosophy journal, Theoria. To read the entire review, written by Niklas Möller, you need access to reach behind the Wiley paywall (e.g. through a university library) or a subscription of your own, and in that case just click here. If you lack this sort of access, clicking the just mentioned link can still let you sample the first page of the four of the review.

Of course, besides describing the content of the book, the reviewer also launches some criticism – as should indeed be the case in any serious academic review. However, the overall assessment is very favorable, evidenced by these quotes of the sections where Möller sums up his overall evaluation:


Munthe’s book is a well-argued contribution to the PP [i.e. precautionary principle] debate, putting neglected justificatory and methodological questions at the forefront. His many discussions of alternative accounts as well as his drawing out the consequences of his own suggestion in practical cases give the reader a thorough, holistic sense of what justification of PP amounts to. /..../ Munthe’s main case, his argumentation for the requirement of precaution as a moral norm, is convincing and puts a strong pressure on too narrow alternative suggestions on how it should be perceived and justified, and he launches a plausible defence of its practical usability.

Should you be interested in acquiring the book as hardcopy or pdf, this can be done through the Springer book webpage above or any major online book seller. If you have university library access, chances are the library has a Springer license and in that case you can access and download the e-book through that channel. If you're interested in the issue of the precautionary principle and its moral and political justification, as well as the ethics and politics of environmental and technological risk in general, you may be interested in a lengthy review article written by myself on exactly that topic, including some further ideas, considerations and contributors over and above those discussed in my book, which will be appearing the the very soon to be released International Encyclopedia of Ethics, under the heading of "precautionary principle".
Upplagd av Christian Munthe kl. 14:50 1 comment:

So, this being the last day before I'm back at the office after the winter holidays, I sense it's the last chance to provide my traditional summary of the basic statistics of this blog for the year that has just passed (the one from last year is here).

First out, an image demonstrating the number of readers over the blog's entire existence that illustrates several things worth highlighting:

As you can see, there was a drastic and significant dip in readership from February (which was a top month of the blog up till then with 6 477 readers) to July (1 852 readers). During this time, I was acutely ill in what turned out to be Hashimoto's thyroiditis, a metabolic condition causing a number of very uncomfortable symptoms, initially mostly of a mental nature and in my case akin to what used to be called a "breakdown", that left me on whole or partial sick-leave till October last year. Hence, during this acute phase I made only five posts, and the decrease of readership can be linked to that, since as soon as I started posting again from August, readership quickly went back to former levels and then increased even more, hitting an all time high in October with 7 234 readers. So, in spite of the dip, the long-term trend of ever increasing popularity of Philosophical Comment is holding up! Total number of readers in 2012 ended up equaling 50 776 and the total number of readers over the entire life of the blog is now very close to 100 000 and will break that ceiling in early 2013.

2012 also turned out to be the year when Philosophical Comment started to receive some major recognition. First, New York Times linked to my report of the death of J.J.C. Smart and, as will soon be obvious, made it one of this year's most popular ones. Just recently, The Guardian used one of my posts from 2011 as a source in an article on the process of privatisation of public health care in Sweden – namely one of my comments on the attempt of the director of leading Swedish private thinktank/research institute, Centre for Business and Policy Studies (SNS), to silence research demonstrating the weak scientific basis of this policy trend - making that piece to quickly rise in the statistics of readers per post. Since mid August, Blogger lists Philosophical Comment in the first row of its "interesting and noteworthy" Blogs of Note, of course, helping to explain further the continued success. Unfortunately, the increased attention has also brought some undesirable side-effects in the form of annoying spam commentators, recently forcing me to temporarily (I hope) change the comments function from open to moderated.

So, over to the popularity of individual posts: 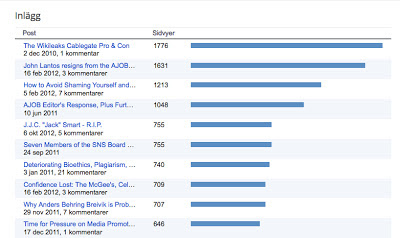 The piece on the Wikileaks cablegate publication from 2010 is still firmly placed at the top, no doubt thanks to the continued publicity around the handling of Bradley Manning, further publications from Wikileaks and the continuously bizarre personal developments around Julian Assange due to his no doubt very deeply felt insistence to avoid visiting my country to be interviewed by the prosecuter regarding rape and sexual coercion allegations. The posts from 2012 that have made the list are, as indicated, the one on the death of J.J.C. Smart and two early posts on the troubles around the management of the American Journal of Bioethics that came to last over several months, with the resignation of Summer Johnson McGee from the post as editor in chief and manager of Bioethics.net as the last event in a long series of several both odd and disturbing ones (links to reports of all of these can be found in the post just linked to). Besides that, I'm very happy that a piece on how academics and students should and could mind themselves in the new landscape of fake or extremely sub-standard online open access journals. The other pieces include, another one of the scandal around Centre for Business and Policy Studies (SNS) from 2011, as well as a not very surprising one as top hit on how to assess the culpability of Norwegian anti-muslim mass murderer Anders Behring Breivik from the same year (I might add that the final court verdict ended up being exactly in accordance with my analysis in this post).

Over to readership, I'm very happy to be able to confirm the continuing internationalisation of the blog, where both the UK and USA are now stronger as the home country of readers than Sweden, where especially Russia but also Germany and Canada are slowly gaining. 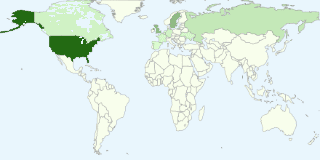 In spite of the obvious and rather expected dominance of anglophone and/or European countries as the origin of the readership, as a whole, Philosophical Comment is truly global in its outreach, with many readers from Asia (especially Japan, India, Indonesia and the Philippines) and South America, which can be viewed with the help of this tool (linked to the blog later than the blogger-statistics given earlier and, in addition, calculating hits slightly differently, but nevertheless serving this particular purpose fine).

So, with hope for the best to all of you in 2013, thanks to all readers, commentators, linkers, tweeters, posters, thumbs uppers, and what have you in this increasingly exciting world of borderless online communication!

Email ThisBlogThis!Share to TwitterShare to FacebookShare to Pinterest
Etiketter: statistics

Thank Obat for the Moderation Requirement

Thanks to a user calling him- or herself Obat with varying made up surnames, who has been spamming the comments fields of this blog with lamely disguised commercial messages during the last few weeks, I will for some time switch the comments-function to obligatory moderation. That is, if you post a comment, it won't appear until I give the go ahead - which I obviously will not if you display some sort of off-topic, commercial or otherwise inappropriate message, ditto link or somesuch. This goes for links embedded in usernames as well.

I regret to have to do this, preferring very much to make it easy for folks to post comments, when they have any. However, the Obats of this world make it necessary, at least for a while.
Upplagd av Christian Munthe kl. 13:26 1 comment: