Brian Leiter, well-known philosopher at the University of Chicago law school and even more well-known philosophy blogger, has recently come under some heavy criticism from colleagues in North America and overseas, following a remarkably strange series of completely unprovoked, outright nasty, harassing and openly threatening email-attacks against Carrie Ichikawa Jenkins, philosopher at the universities of British Columbia and Aberdeen, and some others. These as well as the one against Jenkins are documented here and here. The latter of these resources also offers the following further readings and samples on the subject of Brian Leiter's manners:


For some reason, most of the victims of his behaviour are women, not unimportant in view of the recent critical discussion of the treatment of female philosophers across US academia.

The particular attack against Carrie Jenkins was apparently due to the following blog post that Jenkins publicised due to her attaining full professorship at UBC, this summer. She here sets out the following principles of a professional ethos for herself to abide by:

This, for some reason that is beyond me, had Brian Leiter write and send the following:

From: Leiter, Brian
Dear Carrie:
Since you have issued the following threats aimed at me on your blog:
I’m curious what you’re going to do, especially regarding the second and third. Are you going to spit at me if I see you at the APA or chase me from the room with a bat? That would be bad. Does this mean I can’t list you as a reference? That’s OK. Does it mean you will defame me whenever the opportunity presents itself? That would also be bad.
Also, calling me “unprofessional” is probably defamatory per se in Canada, so I’d suggest you stick to “unethical” (since “ethical” as we all know has no cognitive content). It may be in the US too, I haven’t asked my lawyer yet, but I will.
I’ve grown used to the fact that lots of philosophers are sanctimonious assholes (“SAs” for short), but I’m really curious what you’re “thinking” if anything? I know you only from social media, where you come across as an SA, but it may be in real life you’re a civilized person and not an SA.
So what should I expect going forward? I’m trying to plan out my litigation strategy for the next year!
Thanks for your help!
Best wishes,
Brian
P.S. Don’t worry I’m not going to embarrass you in public about this (though I may quote some of if without attribution, since it is quite remarkable).

As a particularly sour seasoning to this sorry brew of unprovoked hostility, Leiter is in charge of coordinating the so-called Philosophical Gourmet Report, PGR, a sort of ranking list of philosophy departments in the USA and the rest of the English speaking world, which means Leiter is a power figure of sorts throughout this territory. This position has been activated by Leiter in his initial reaction to the complaints against him, insinuating that there is a covert operation initiated to undermine the standing of the PGR, as well as corrupting polls launched by Leiter on his blog about the usefulness/desirability of updating the PGR and, more recently this, as he has apparently started to realise that his own linking of PGR to his own bizarre and inconsiderate behaviour towards professional colleagues may have started to hurt his baby. In the first of these posts, Leiter basically repeats or recounts chosen tidbits of the attacks on the people mentioned earlier originally sent via the emails displayed above and through the links above.

However, it seems that Brian Leiter has gotten all of these things wrong – just as he (heaven knows why) got it into his head that Carrie Jenkins personal ethos was directed at him personally. It is, in fact, his own behaviour against colleagues that now has prompted, as I write, 149 and counting academic philosophers across North America and overseas to sign an official statement against his actions – in particular the completely unmotivated nastiness towards Carrie Jenkins, and to call into question not the PGR, but Leiter's association with it. These signatories not only protest against the distasteful power abuse and bullying of Leiter, they also midly suggest that they themselves and other colleagues so positioned will withdraw any association with the PGR as long as Laiter is associated with it. This statement/letter can be read here, and I quote it verbatim (minus the signatories, which can be inspected via the link just provided):

A serious issue has arisen that impacts Professor Carrie Ichikawa Jenkins.
Professor Jenkins has been targeted by Professor Brian Leiter (University of Chicago) with derogatory and intimidating remarks privately by email in July, and recently with further derogatory remarks publicly on Twitter.
Professor Jenkins wrote the following blog post in July:
http://csi-jenkins.tumblr.com/post/90563605390/day-one
in response to which Professor Leiter sent her an email saying that she comes across as a "sanctimonious asshole" (and indicating that he is not sure whether "in real life" she is a sanctimonious asshole or a "civilized person"). The email also intimates that Professor Leiter is contemplating litigation against Professor Jenkins, states that he is wondering "what she is 'thinking' if anything", and asks if she plans to spit at him at the APA or chase him with a bat.
He has now followed this up by saying publicly on Twitter that he has called Carrie a "sanctimonious arse". He sent her another email in an attempt to apologise for 'upsetting her', which only succeeded in causing further harm.
The effects of this on Professor Jenkins since July have been very serious, impacting her health, her capacity to work, and her ability to contribute to public discourse as a member of the profession. In the light of this recent incident on Professor Leiter's public Twitter feed, we feel compelled to act. We are now standing with Carrie publicly, as colleagues and friends.
Professor Leiter has the power to have this kind of impact on Professor Jenkins in part because of his control over the Philosophical Gourmet Report. We don't find what has happened to our colleague acceptable, and don't wish voluntarily to help provide Professor Leiter the power that makes it possible.
It is up to each of us individually to decide what we will volunteer to do. The undersigned members of the philosophical community have decided to decline to volunteer our services to Leiter's PGR. While we recognise that there are other ways to condemn Professor Leiter's behaviour and to support our colleague, we think the best choice for us involves publicly declining to assist with the PGR. We cannot continue to volunteer services in support of the PGR in good conscience as long as Brian Leiter continues to behave in this way. We therefore decline to take the PGR survey, we decline to serve on the PGR advisory board, and we decline to send Professor Leiter information to help him compile the survey (e.g. updated faculty lists and corrections). We are only declining to volunteer our services to the PGR while it is under the control of Brian Leiter. With a different leadership structure, the benefits of the guide might be achieved without detriment to our colleague.
We feel that we need to consider very carefully what kind of example we are setting for graduate students, and for philosophers across the whole discipline, when something like this happens. Tolerating this kind of behaviour signals to them that they can expect the same in their own professional lives. We wish to set a clear example of how to respond appropriately but firmly.

ADDENDUM
On September 24, the people listed above, motivated to decline to volunteer services to the PGR by these specific incidents impacting Carrie, signed this statement.
Others may also be similarly moved by these incidents, or may know of other relevantly similar incidents, and thus may not wish to participate in the PGR while it is under the control of Brian Leiter.
If you wish to add your name to those declining for these reasons to volunteer their services to the PGR while under the control of Brian Leiter, please email septemberstatement@gmail.com with your name and affiliation.
Please use your verifiable university email account to avoid confusion.
Those who email are being added to the list posted below this addendum. The people signing are writing as individuals; like the philosophers listed above, each signatory declines to volunteer his or her individual services to the Philosophical Gourmet Report while it is under the control of Brian Leiter. This list will be updated as time allows.

As you can see, the statement is open for additional signatories and I myself just sent an email to add my own. Any professional academic philosopher may do the same, using the same method I did (also described above): 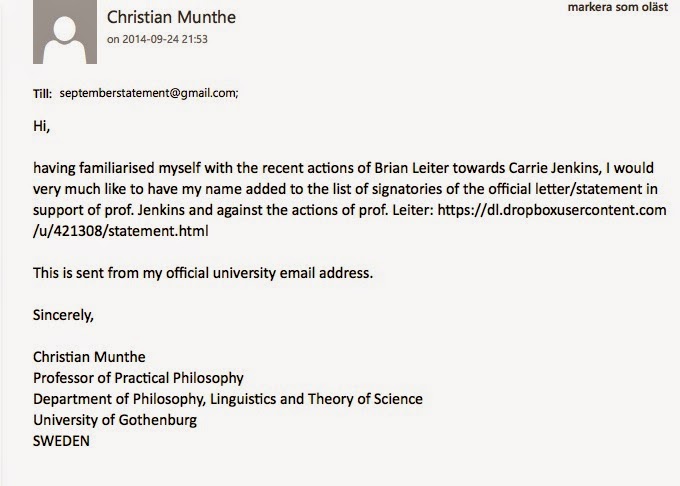