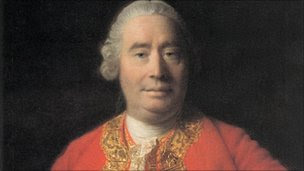 I may just as well quote The Royal Institute of Philosophy:

The mighty David Hume was born on 7 May 1711. Enthusiasts might find an excuse to raise a glass twice, because before Parliament’s reform of the calendar in 1752, Hume’s date of birth was 26 April.

For philosophers or those who have had some philosophy education, it would clearly be overdoing things to remind about the importance of Hume's achievements and legacy for just about all of contemporary philosophy – as well as psychology and behavioural, cognitive and social science. On this blog, but one post has referred explicitly to Hume, but I assure you that the legacy of his thinking and intellectual temperament can be traced in all posts. As Isiah Berlin put it in The Age of Enlightenment:

No man has influenced the history of political thought to a deeper and more disturbing degree.

And this may be said just as much about the development of science – not least the still very much lively and evolving sciences of human mind and action.

So, if you don't know much about Hume, but becomes curious – where should you start? Well, here nuances of taste would divide the advice you would get from different philosophers. My own favourite is the magnum opus of his youth, A Treatise of Human Nature – where, with a young person's passion, Hume sets out much of the ideas he would later work on in more concentration. It is only in the Treatise, though, where we can meet the wide philosophical grip of Hume in its entirety and most radical form. Here you will find ideas that are still radical and provoking and that, in contemporary linguistic dressing, are not seldom presented as the latest achievement of this or that currently upcoming academic star. Many of my colleagues prefer the more balanced approach of the "Enquiries" that Hume wrote in his later years, but as a primer, I still prefer the Treatise due to its passionately revisionary programme and style.

Both texts (and more) are available for free online inspection. If you can bear with the older style of English in which Hume himself wrote, the Hume collection at the Project Gutenberg is a good start (you need to scroll down a bit on the page linked to here). If you find it tiresome to read those texts, the distinguished contemporary philosopher Jonathan Bennett has made his own "translations" of Hume's texts into contemporary English.