Not In My Name!

This is inspired by my colleague in mathematics, over at the Chalmers Institute of Technology, Olle Häggström (forthcoming with this book about existential risks, soon to be out on Oxford University Press), who writeson his blog:


The flyer depicted below, containing slander against and blatant lies about the country of Sweden, is currently being distributed at a refugee camp on the Greek island of Lesbos and at many other places on the borders of the European Union. Representatives of the extreme and anti-immigrant right-wing Sweden Democrats party confirm that their party is behind the campaign.
Notice, among the signatories, "The People of Sweden". That is forgery. The people of Sweden includes myself. I have (along with the vast majority of my compatriots) not been consulted about the letter, neither in person, nor via legitimate proxy. I do not stand by its disgraceful content.
The Sweden Democrats party has its roots in Nazism and the white supremacy movement. Since 2010 it is represented in the Swedish Parliament (and is currently holding 49 of the 349 seats). 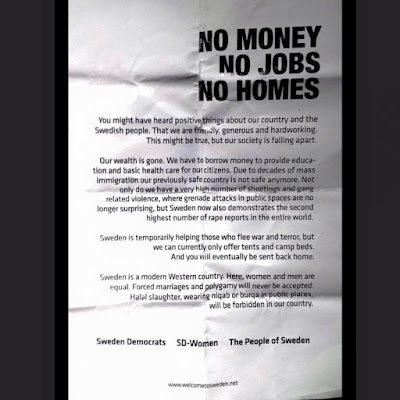 Adding for myself: a self-professed "nationalist" and essentielly populist party, currently representing slightly more than 12% of the voters, slanders its country and claims to represent the entire "people of Sweden". Together with the blatant lies, this says all about the arrogance, hypocracy and view of democracy to be expected of these people, should they ever gain actual political power. To this may be added, their recent slippery passive support of a wave of arsonist attacks against premises for asylum seekers, following fiery rhetoric about using "all means available" to fight the current wave of refugees arriving in Sweden and supporting the online posting of maps showing the locations of asylum seeker lodgings, albeit these have been classified by the national Migration Agency due to the wave of terrorist attacks. These people are clearly desperate and on the defensive, as it is the only one with no solutions whatsoever for handling the current political crisis in Europe regarding refugees (besides the totally unrealistic and economically catastrophic idea of shutting off the country from the surrounding world and weed out those residents who are not "Swedish" enough). This I could see for myself when its leader was pressed about the untrue statements (regarding "coming bans" on niquab etc.) on national TV yesterday, and behaved quite deranged; repeating as a robot that this is what his party wishes to see happen and therefore it will happen. Apparently he is unable to distinguish between his own political wishes and actual reality, which is another reminder about the nature of these kinds of political parties. I suppose that this is also what makes him think that he represents the Swedish people, albeit his 12% in the parliament has gained him no influence, since the other parties, of course, sees though the thin laquer of apparent democratic alegiance and spot the fascism and racism underneath. Again, this is a reminder what kind of leaders we would gain should these people ever gain any political influence: arrogant liers, unable to distinguish between reality and dream, with a political program that would sink the country into an economic slump and their only remedy to shrink and shut it off further.

Not in my name!

PS. Should you so wish, I made my own analys of the new racist/nationalist ideology currently held out by several parties like this around Europe a few years back: here, here and here.
Upplagd av Christian Munthe kl. 09:28 2 comments: