Attend our summer school on the Ethics of Family in Health- and Social Care! 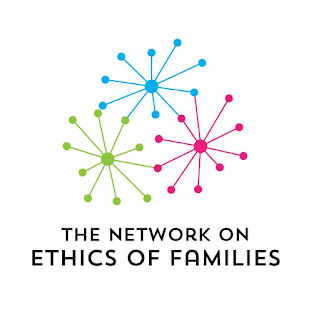 One of my commitments is as active member and member of the steering group of an international network on family ethics research, headed by Marian Verkerk, Professor Ethics of Care of the University Medical Centre Groningen. The network has a forthcoming volume (to which I contribute two sections), edited by Marian, Hilde Lindemann and Janice McLaughlin, on Oxford University Press, with the preliminary title Where Families and Health Care Meet.

Another output is a new summer school, organised by the UMCG, on the broad topic of ethical complications and issues in health and social care due to various aspects of family and how patients and clients, as well as professionals, are inescapably embedded in webs of close personal relationships and the fact that society and institutions are all built on assumptions of such webs being in existence. The course is open to masters as well as PhD students and goes under the heading of What About the Family? Besides myself and Marian, the featured speakers/tutors include Ulrik Kihlbom (Uppsala University), Hilde Lindemann, Jamie Nelson (both Michigan State University), Veerle Provoost (University of Ghent), Jackie Leach Scully, Simon Woods (both Newcastle University) and Kristin Zeiler (Linköping University), and others yet to be confirmed members of our network from the universities of Göttingen and Lübeck.

Here is the course webpage. Below is a 2 page flyer that you are more than welcome to share in your networks and with whoever you think maybe interested. Hope to see you in Groningen in August! 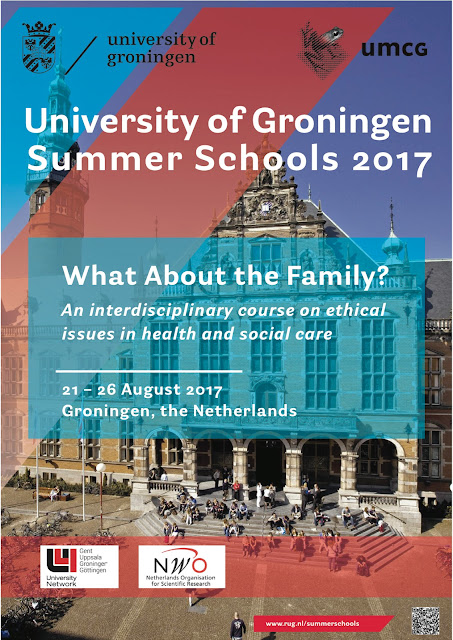 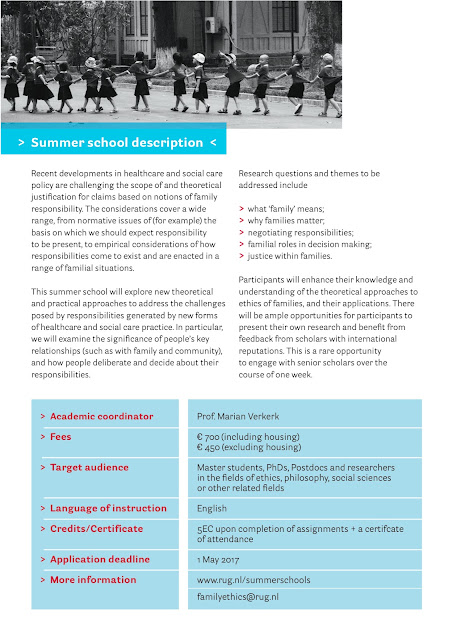 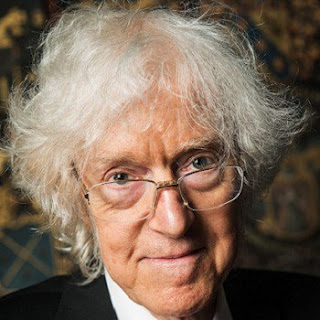 Unexpectedly, Derek Parfit died on new year's day 2017, an event sending shock-waves throughout the global philosophy community, as he was no more than 74 years old. For you who don't know who he was, it can be summed up in terms of the most important moral philosopher of the 20th and, so far, the 21th century. With his book Reasons and Persons (Oxford UP, 1984), he single-handedly redrew the intellectual maps of normative ethics, philosophy of action and rationality, value theory and existential philosophy, partly by making intriguing revelations of how they interconnect, and demonstrating puzzles and challenges coming out of that, which a lion's share of the philosophy world is still grappling with in one way or the other. He followed that up with the monumental On What Matters, of which two volumes have been published and a third is rumoured to be on its way later this year. In 2014 Parfit was awarded the Rolf Schock Prize in Logic and Philosophy, which I celebrated with this little parody piece of his distinctive writing style.

There's already a fair portion of good in memoriam pieces out there, featuring personal reminiscence, summaries of his life and works, as well as links to videos of his lectures. A nice listing can be found on Harvard University's (one of the top institutions to which Parfit was linked) memorial webpage.

I never had the pleasure of meeting Derek Parfit in person (and many bear witness of that this would indeed have been a pleasure), but his philosophical work has had a large impact on my own philosophical explorations, for what they're worth. When I started to attend the "higher seminar" in practical philosophy at Stockholm University in 1985, Reasons and Persons was on the reading list for a full term, and the seniors took turns introducing the different parts, sucking me and the other "youngsters" into sophisticated philosophical reasoning and argument on a level way above what we had ever experienced before. I choose, as a consequence, to write my B.A. thesis on a few pages of part 2 of the book, where Parfit defends what he calls the "Critical present aim theory" of practical reason or rational action, according to which certain individual desires may be irrational in themselves due to their very content. I was critical of Parfit's way of supporting "CP", as I found it putting the cart before the horse by invoking what to me looked like a fundamental moral conviction (that it's not justified to prefer suffering just because it occurs on certain weekdays) as its basis, which would be problematic in a question begging manner given Parfit's aim of using CP to support the idea of objective moral truths. But this was more importantly a formative experience of how well made philosophy will always be open to questioning if only you work hard enough on understanding its details – gaps for criticism are only absent when the work is marked by obscurity and ambiguity, and therefore you should never fear obvious openings for disagreement in your own work, they are unavoidable. Later, I wrote my Ph.D. thesis on the morality of abortion (in Swedish), and there both the discussion of personal identity over time, and (more importantly) the moral importance of future people came to provide very important input. These aspects of his work then continued to have an impact of my later work in bioethics, e.g., on embryo research, reproductive ethics and gene technology. Later, Parfit's musings over problems of collective action, value aggregation and the pragmatics of applying ethical theories in practice (part 1 of Reasons and Persons) added important context and basis for my contributions to public health ethics and the ethics of risk and precaution.

Now, it should be underlined, that Parfit's influence has never been that of a prophet – someone's whose teachings one accepts and then spends one's life as a follower of, working out the details with the assumption that the master's words must never be doubted. Parfit's strength was never the thesis, but the argument and its analysis – often leading to initially apparently clear positions falling apart into zillion variants, each of which in need of their own little set of arguments. When he pursued a substantive thesis, I often disagreed with him, albeit acknowledging much of the analytical landscape created to reach it. Parfit was a philosopher who ingeniously created intellectual context and complication for others to freely move about within. In that way, much of whatever I have ever managed to contribute to my own little corners of the vast world of philosophy wouldn't have been there for the picking, had it not been for the context of problematisation and complexity provided through Parfit's prior achievements. This, I'm convinced, is true of a great many other currently active philosophers as well. And I believe that this will continue to be the case for a fair amount of time ahead.