This is related to my recent post on the atrocities surrounding the preparations for the Qatar football / soccer World Cup in 2022, and the associated obviously morally defunct organisation of FIFA. Just yesterday, following another pathetic round of attempted FIFA whitewash of the recent awarding process of the World Cup to same Qatar and, before that, the stellar beacon of human rights and democracy that is Russia, The Sunday Times revealed fresh evidence of corruption, to no surprise of anyone.

So, with that in mind, today's tongue-in-cheek "revelation" from The Telegraph, does not seem at at all unrealistic. As a good friend of mine commented spontaneously: "why didn't we see that one coming?": 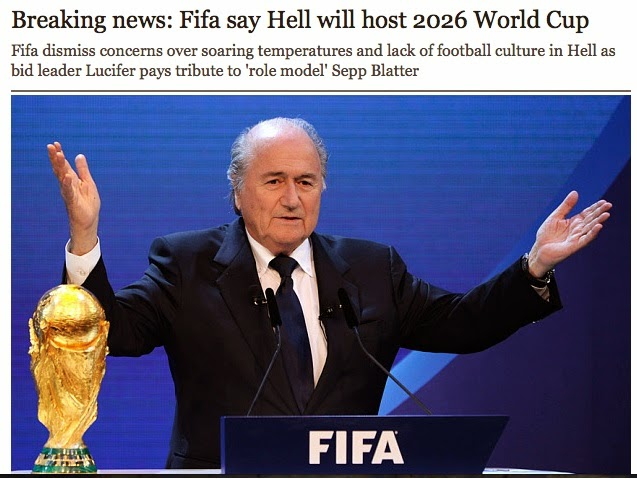 The report gives you the background to this very plausible forthcoming development, where 'Fifa was particularly impressed by “Hell’s well-organised system of circles where fans can listen to vuvuzelas” and watch England take on Germany in a penalty shoot-out until the end of time'. And, it continues:

Indeed, Lucifer, who has asserted control over the nascent Infernal Football Federation, is now regarded as a Blatter protégé and a leading candidate to take over from the Fifa president, should he ever wish to step down.

“Sepp Blatter has been a wonderful role model,” confirmed Lucifer. “But he still has so much to teach me before I can make the step up from running Hell to being the Dark Lord of an organisation as demonic and demented as Fifa. He is a constant inspiration.”