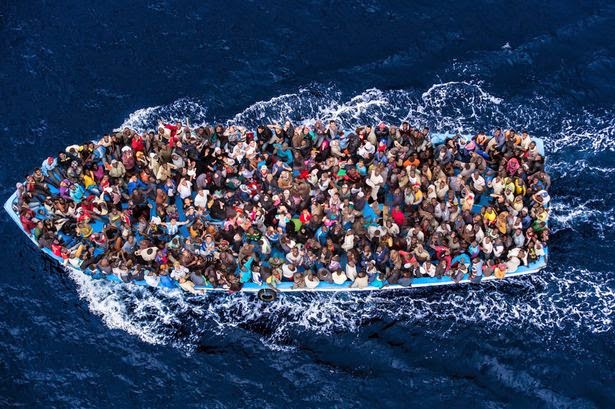 There has been abundant reporting recently on the continuously ongoing exercise in inhumanity that is European Union refugee policy. Alas, the focus is often on singular incident, such as the recent tragedy of the sunken both that had at least 700 die of drowning in the Mediterranean (here, here, here). However, already several month ago, BBC reported that in the course of just a few months last year, over 2 200 people were estimated to have lost their lives due to similar causes in these deadly sea. A more recent report from the International Organisation for Migration (IOM) is cited by the same source as implicating an expectation of the number of people meeting similar destinies in the Mediterranean alone will reach 30 000 this year (also reported here), and other sources note that the number of refugee deaths in the Mediterranean is already 30 times higher this year compared to the same period in the former. A detailed map of all registered deaths since the year 2000 can be found here. 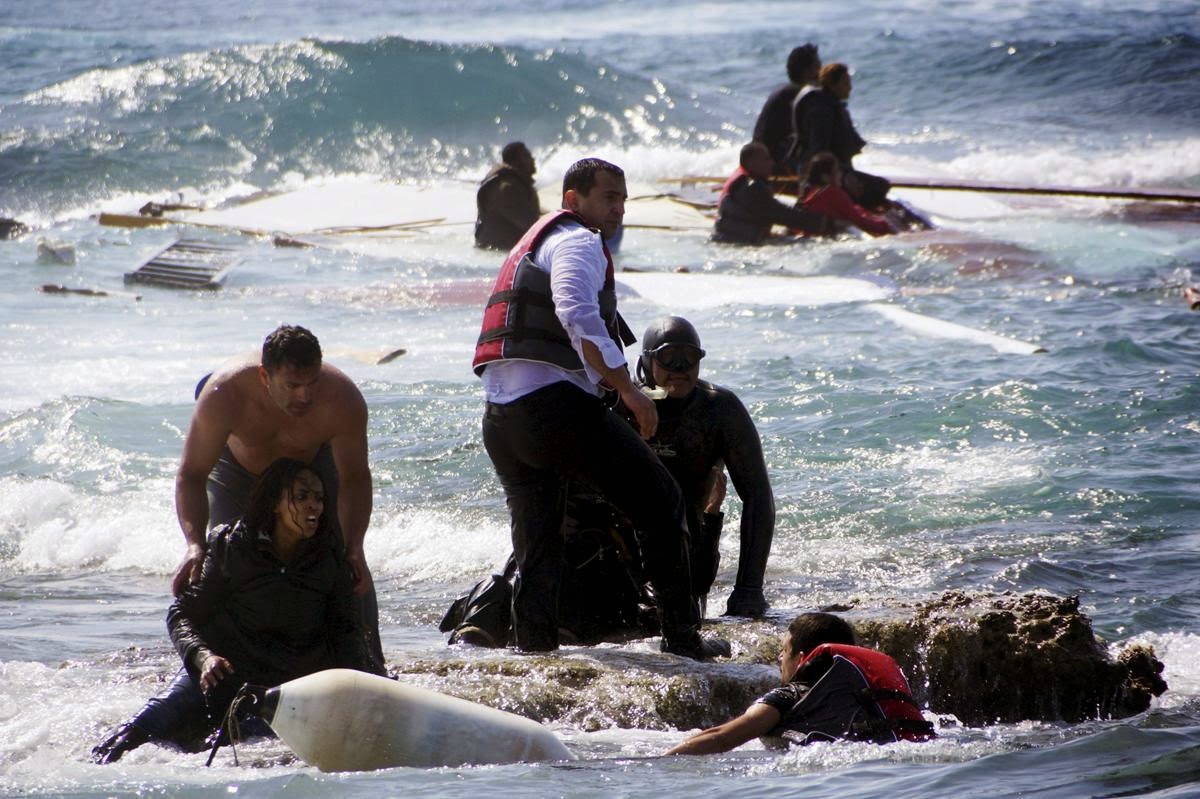 As dryly noted by well-known public health educator, and my countryman, Hans Rosling in a recent video – rhetorically answering the cynical question why refugees don't fly instead, as this is much cheaper and safer – the primary cause of this development can be located almost entirely in the inhuman border and refugee policies of the European Union and its member states: 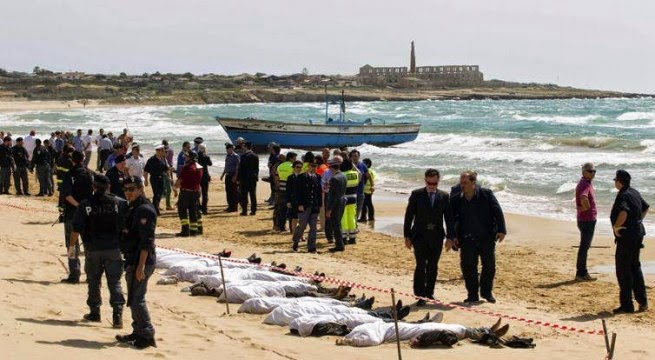 True to this essence of European policy in this area, in the 2014, the UK announced that it would cancel all further engagement in missions to rescue victims of capsizing refugee boats, leading to sharp reactions, e.g., from Amnesty International. In a similar spirit, the European Union has reacted to the more recent outcries, with a 10-point plan, most of which is nothing else than just more of business as usual, as noted by, e.g., Human Rights Watch. For the essence of EU border and refugee policy is to stretch its supposed commitment to international asylum agreements to its limits, bearing in mind that the right to ask for asylum starts at the border points of a country and keep the eyes shut to the devastating consequences of this sort of policy:


1. KEEP THEM OUT!
"the EU's maritime patrolling operations in the Mediterranean, called Triton and Poseidon"
"capture and destroy vessels used by the people smugglers"

2. PREFERABLY BY PREVENTING THEM FROM NEVER ATTEMPTING TO LEAVE!
"EU will engage with countries surrounding Libya through a joint effort between the Commission and the EU's diplomatic service."
"The EU will deploy immigration liaison officers abroad to gather intelligence on migratory flows and strengthen the role of the EU delegations

3. AND IF THEY HAPPEN TO REACH THE EU, GET THEM OUT AS QUICK AS POSSIBLE!
"European Union's asylum support office will to deploy teams in Italy and Greece for joint processing of asylum applications."
"EU governments will fingerprint all migrants."
"EU will consider options for an "emergency relocation mechanism" for migrants."
"EU will establish a new return program for rapid return of "irregular" migrants coordinated by EU agency Frontex from the EU's Mediterranean countries."

At the same time, similar thinking is shaping this adaption to European Union border and refugee policy standards by Bulgaria (along its border to Turkey), which hopes to be admitted as full member shortly and therefore implements this perversity, apparently failing to note the bitter ironic link to its own iron curtain past (also here): 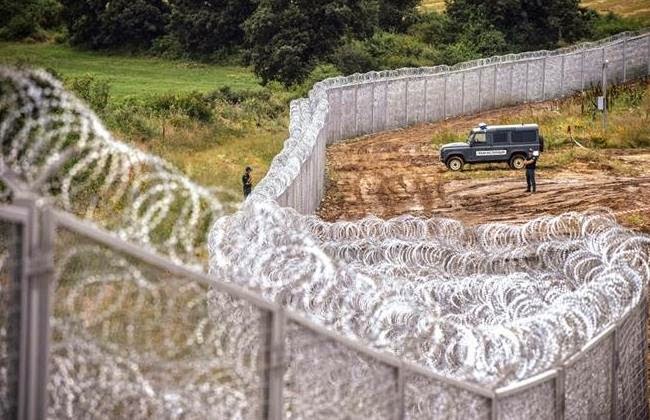 This is the voice of three monkeys failing to register the complete unsustainability of their chosen path. Or, let me be more precise, this path is completely unsustainable as long as the European Union recognises the notion of its lack of rights to commit organised mass murder. For at the end of the day, this is the only conceivable endpoint that this policy can have.

The idea that capturing a few criminals, currently exploiting the desperate situation of refugees created by European Union policies, would somehow make said refugees stop attempting to finalise their escape is nothing but plain stupidity. Once these bands are dealt with, there will instead be the initiatives of others, not least refugees themselves and ordinary people trying to help them. For the need to escape is not created by these minor border bands of cynic criminals, those are mere symptoms of an infinitely more cynic and inferior way of responding to the ever present needs that have had refugees on their way across history and the world since the dawn of humanity. At that point, the EU will face the choice of continuing the policy and thus deploy the military and police forces referred to in its 10-point programme to start attacking the refugees themselves, besides anyone aiding them. Similarly regarding the idea to "engage with countries surrounding Libya" (and other bordering countries, as the need arises) and "strengthen the role of the EU delegations", effectively to have bordering countries set up concentration camps funded by the EU, to effectively lock the refugees up to stop further escape (a recent analysis by Doctor's without Borders of how bad the situation is in this respect already now is here). Again, the question then arises what will be the EU policy when these incarcerated people – as they have all reason and every moral right to do – attempt to break out. In both cases, the logic of current EU policy seems to dictate  nothing less than genocide. Whether or not it is performed by proxy or bona fide European armed personnel is, in this case, completely irrelevant.

But, of course, my point is that this analysis demonstrates the complete unsustainability of current European Union border and migration policy. Especially pondering that current refugee and migration streams are in fact nothing compared to what may be expected in the future due to the effects of climate change and other environmental problems (also effecting economic and social instability and war in their aftermath), one can easily see that it can end up nowhere else than in massive genocide on desperate people fleeing destitution or other dire circumstances. Pondering the constitutional backbones of the EU, such as the European Convention of Human Rights (not to speak of EU member states' uniform commitment to the UN Convention on the Prevention and Punishment of the Crime of Genocide), this should effect careful consideration of the increasingly apparent folly of the current policy path among European policy makers and high officials. Is this how you want to end up; as mass murderers on a grand scale – is that what Europe and the European Union is about? This is the question that those three monkeys desperately seek to avoid.