Merry X and a Happy Y from Philosophical Comment!

We are approaching (or perhaps in some cases already in) that period this time of year where various festivities originating in the phenomenon of winter on the northern hemisphere of the Earth and that of summer on the southern are taking place. Call it whatever you like, regardless if you want to install some sort of institutionalised religious connotations into it or nor not – for the purpose of this post I'll call it X. We are also quickly getting closer to a night that in many people's minds has a meaning over and above expressing the calendar convention invented in the 1500's. Nowadays mostly an excuse for adding to CO2 emissions in spectacular manner that is televised all over the globe, I'll call this phenomenon Y. As we are approaching X and Y, like last year, I thought that I should sum up how Philosophical Comment during has been doing in 2011 – if nothing else for the practical reason that after Y, my blog statistics will not tell me specifics for that year.

The overall trend is that the interest in Philosophical Comment is growing in a (for me) rather unexpected way. Here's a graph illustrating the number of readers since May 2009 to this day (December 20, 2011):

As I write this, the total number of readers is quickly approaching 40 000 (thirty-eight and a half thousand to be precise). The last 3 months have ended with over 4000 readers each and if nothing extraordinary takes place, this will be the result also of December.

Looking at the posts from this year, the charts in terms of number of readers looks like this:

For some reason that is beyond me, a post in a series reporting about a partly inside, partly official quarrel related to a leading research journal in my field, The American Journal of Bioethics, has continued to attract readers in spite of being a matter of the past and is the top 2011 post by far. The reason for why the second place is occupied by my piece on publication ethical problems within bioethics is far more understandable, not least since it spurred quite a lot of debate involving, among others two chief editors of bioethics/medical ethics journals. It is an even smaller surprise to find my take on the decision to declare Norwegian extreme right terrorist and mass murderer Anders Behring Breivik legally unaccountable attracting readers – the post has also been linked to by several bloggers in Norway and other Nordic countries. After these comes a number of posts that have attracted well over 500 readers each, among which I am particularly happy to find a very recent one (thus promising more) on where activists who have been targeting the quack scam cancer clinic run by a Stanislaw Burzynski should be directing their attention to put a halt to this sorry excuse for medical practice. I'm also pleased that one of the posts on the very controversial and heavily criticised claim of Priscilla Coleman that abortion can be shown to cause mental health problems (as it seems, solidly rebutted by a recent huge study, if not before) made the top list.

It is difficult to extract more precisely what sort of people from what places are reading Philosophical Comment,  but one trend this year is clear; Russia and Germany are picking up behind USA, Sweden and the UK. Now, if I look at statistics for particular weeks or months, odd countries of all sorts may pop up, but the just mentioned are the clear top sources of readers. So, in all, the readership continues to be quite global, although some countries from the northern hemisphere are dominating as the home of readers: 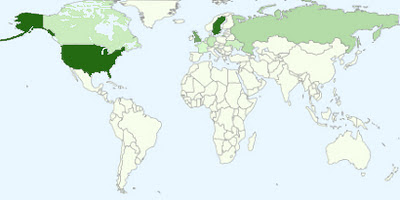 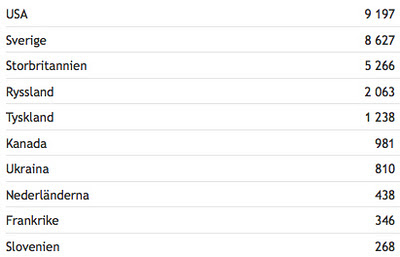 So, that leaves me nothing more than to thank you all who read, link, pass on, quote, comment and so on. See you next year, here or on twitter. Merry X and a happy Y!
Upplagd av Christian Munthe kl. 13:22 6 comments: