So here's the not so very tasty news from my country today, broken by our largest daily, Dagens Nyheter: The police force of southern Sweden has been running a registry, based on biological/genetic/familial/genealogical principles worthy of any classic nazi or racial biologist, of roma or "traveller" people, comprising of over 4000 persons, among which are 1000 plus children – and also some long deceased ancestors. Read English reports here, here and here (some other Swedish reports are here, here, here, here). One of the family-tree structures look like this (click it for more examples): 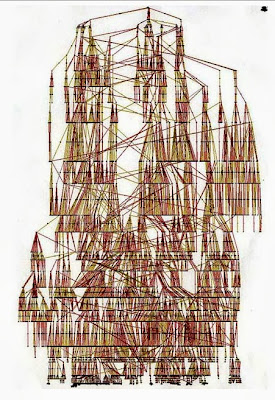 The police of south Sweden has made a number of increasingly pathetic attempts to dodge this obviously undodgeable shitstorm, ranging from first denying the existence of any registry, then admitting that but claiming that it is not organised by any "ethnic" principles (the title of the registry is "traveler abouts" – duh!), then possibly sensing this is not going to go away, starting to shift the blame to the classic sort of patsy: the lone, slightly crazed police officer acting "on his own" and excessing a little bit in his/her otherwise admirarable sense of duty. This nice composition of headlines from today sums up how totally feeble and cowardly this whole thing is being handled by those responsible locally: 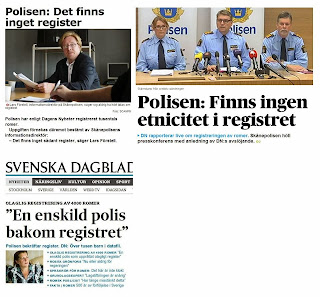 Right. And at the same time the registry, for legally it is one, is reported to have been in wide use, not only in the south, but also in my own quarters of Western Sweden, for instance. Ok, so maybe not a lone gunman after all....

By now the national chief of police, Bengt Svensson, reacted strongly and critically, to say the least, and ordered all regional chiefs to probe if anything similar is going on anywhere else (you hear those shredders working all through the nights, and all those hard-drives being dismounted and crushed, folks?) and, in consequence, the police has reported itself to.... the police and the relevant prosecutor has already said that an investigation will be opened regarding possible crimes against the law on registration of personal information (PUL, which is pretty strict), and possibly other laws as well. A bit late, but still, our minister of Justice, Beatrice Ask – otherwise famous for condoning police racial profiling, or at least pooh-poohing reports about it – also has made a statement. Should that fail, the Council of Europe's commissioner for human rights, Nils Muznieks, has already stated his view that the whole thing is in violation of the European Convention on Human Rights (since Sweden is an EU member state, also a part of my country's constitution), so that would take the case to a probable loss in the European Court of said human rights, which would then force a legal change, if necessary. In parallel, also today, UN's committee against racial discrimination is once again mounting criticism against Sweden, among other things for its lack of action against discrimination and stigmatisation of people of roma origin.

This leads into the funny bit, which motivates this post:

It is namely the last line of defense (offered by deputy chief, Petra Stenkula, and picked up by this shady excuse for a legal commentator, to mention one of a bunch – nice company you keep, deaputy chief!), apparently, of the south Sweden police, that the registry (which is not a registry, but a "list") of roma or travelers (which is not that but a list of "traveler abouts") is (at least initially), in fact a completely legitimate part of a police investigation of some crime connected to a family feud some years back – let alone, it might have gone a bit astray over the years. Right, that's why they need those long deceased people born in the 1800's and the two year olds in there - stupid me, I should have known!

But wait a bit, let's not be too harsh!! Let's in fact accept this explanation - it is actually quite apt by the police to set up registries of this sort, if only it pertains to an ongoing criminal investigation. Let's now chew really well on exactly that:

As we saw, there's a new criminal investigation that has just been opened! Apparently it's about police officers in south Sweden creating and using possibly illegal and unlawfully racist registries of people. So, let's accept the just given explanation and the principle that it implies and act really thoroughly on that: Let's have that registry of all those police officers in south Sweden who are potentially implicated for setting up or using (the Swedish law relevant here may actually ban mere use) the registry – quite possibly that'll be all of them. And be very sure to have deputy chief Stenkula's name as the very first entry, as the feeble attempt at whitewashing that she has offered obviously makes her a prime suspect. And while you're at it, let's put all their family members in there too - including small children of about two and up and a few long dead ones as well, just for good measure.

You just act on your own fine principles and do just that! Savor how good it feels! Do it tomorrow, do it now, do it yesterday and enjoy!