Big news today on an issue within the US psychology profession and academic speciality that has been bubbling for quite some time – I posted about some of the brave and persistent activism that has been driving it a few years back, here. It is thus all about the completely disgraceful role of the American Psychological Association (APA) in actively aiding and abetting both the practice itself of so-called enhanced interrogation techniques – retrospectively declared even by the US government itself to be torture – in military and intelligence operations post 9/11, and the actual complicity of professional psychologists in these practices. In an independent report (online readable here, and downloadable here), specially commissioned by the APA, former federal prosecutor David Hoffman reveals the APA involvement not only to be quite extensive, but also involving outrageous manipulation of internal processes and skewed application of guidelines and regulation of several high ranking APA officers and representatives. One of these, the director of ethics Stephen Behnke, has already been fired. Besides the pointing out of several individuals besides Behnke, whose heads deserve to be set rolling with equal enthusiasm, a central recommendation coming out of the report is that APA should adopt the same policy as the American Medical Association and ban members from participating in military interrogations, and this suggestion is reported to have been quickly picked up by the APA board of directors. Most fitting, and let us all hope that bill carries all the way through. Not least in the light of an independent comment in The Guardian by long-standing anti-torture activist, medical doctor and bioethicist Steve Miles – who among other things run the Doctors Who Torture Accountability Project – that the APA complicity with the US torture policies has been a general impediment for the general fight against torture practices globally. An extensive public apology and list of actions, among these the mentioned ban, has been published by the APA on its website, although it also contains some seemingly desperate attempts to flee responsibility by highlighting some less important findings, e.g., that the motive seems not to have been outright support of the torture program or US policy in this area, but "to curry favors" with the federal government and its agencies. That is: "we only did it for the money and the glory, not at all because we thought it was the right thing to do". As if that would make any difference for the better! 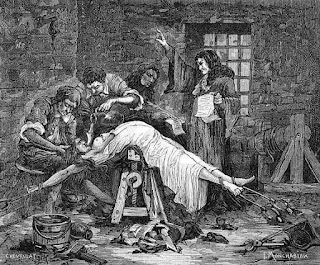 A less partial, extensive and popularised summary of the essentials of the report by New York Times reporter James Risen, who has helped push the uncovering of the heinous APA practices with his book Pay Any Price, can be found here.