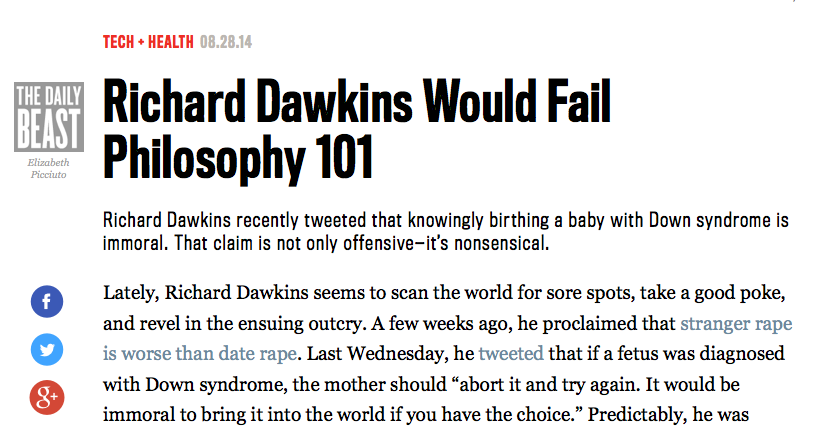 So, I don't think anyone missed Richard Dawkins' recent ill-considered and inconsiderate tweet – in response to a personal, cautious reflection by a follower – that abortion of foetuses with Down Syndrome is morally obligatory, as well as the storm of outraged reactions to that and Dawkins' own retrospective apology and defence of his statements. Some reports are here, here, here and here. And Dawkins' own statement of apology and defence is here. 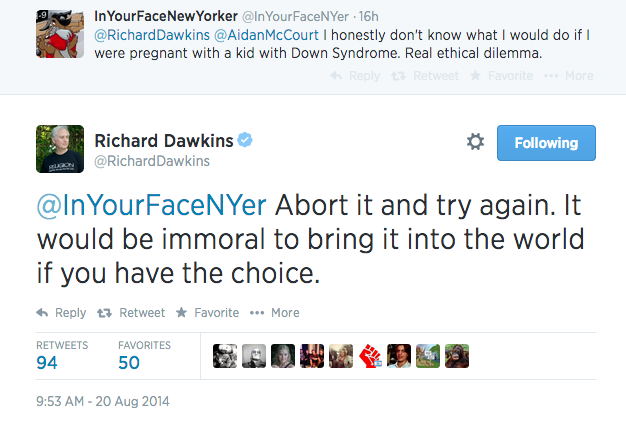 Now, in an article by Elizabeth Picciuto in The Daily Beast, a number of philosophers/bioethicists, among these myself, comment on Dawkins' statement from an intellectual point of view, as well as his attempt at formulating an intellectual and "logical" (a favourite adjective of Dr. Dawkins in his comments on the criticism) defence of it. Spoiler: it's not worth the paper it's written on and, in particular, it's peppered with logically invalid inferences.

On a personal note, I would like to add one thing to what's said in the article: Richard Dawkins' actions in this matter are especially peculiar in light of his former standing as Oxford professor of the public understanding of science. What he has done here is to promote widespread misunderstanding of bioethics, moral philosophy, as well as regarding the health science aspects of Down Syndrome and the rationale of liberal abortion legislation and prenatal diagnosis.