I'm happy to announce that this year's Rolf Schock prize in philosophy and logic has been awarded to University of Oxford All Souls College emeritus fellow Derek Parfit. The prize, which also is awarded in mathematics and the musical and visual arts is of a sizeable sum of 600 000 Swedish krona ≈ € 68 000 ≈ $ 93 000 and is one of, if not the, largest research prizes in philosophy. Former laureates include W.V.O. Quine, John Rawls, Hilary Putnam, Thomas Nagel, Saul Kripke and some other monumental names of 20th and 21th century Western academic and, let's be fair, anglophone philosophy. The list still waits to include a female receiver, I'm sorry to say.

But this takes nothing away from Derek Parfit, who has single-handedly transformed contemporary systematic moral philosophy more than anyone after John Rawls. Already his 1984 modern classic Reasons and Persons earned him the motivation of the selection committee that he receives the prize “for his ground-breaking contributions concerning personal identity, regard for future generations and analysis of the structure of moral theories”. This is a book that no even semi-serious scholar of ethics can avoid, as Parfit picks apart established ethical traditions and theories in to their bare bones, and further on into their marrow, to finally come out on the other side with a completely new research program for academic ethics scholars and moral philosophers, regarding, for instance, how to think about part-whole conflicts, personal identity and demarcation, future generations and population policy, the structure and role of theories of the good life, and the relationship between practical rationality, morality and the normativity of moral deliberation. He works in the very best of the British academic philosophical tradition, where Hume and Sidgwick are two of the most obvious influences, and has a now well-known style of writing that, as in the case of Quine, is imitated by many but mastered by only one. A few years back, he published the more synthetic and rather monumental work On What Matters, but to me R and P is what makes Parfit the giant he is, as his refusal of being content with any of the suggestions he contemplates there and the constant unfolding of new layers of paradox of human moral thought has produced fuel for philosophers to work on for, I'd say, at least a few centuries ahead.

On of Parfit's exceptional qualities is his straightforward and simple way of moving effortlessly from highly technical exercises of intricate problems into the most engaging narrative examples, broadly fleshed out to provide humanity to the philosophical issues he engages with. This excerpt from Reasons and Persons, where the theme of personal identity is introduced is a well-known example: 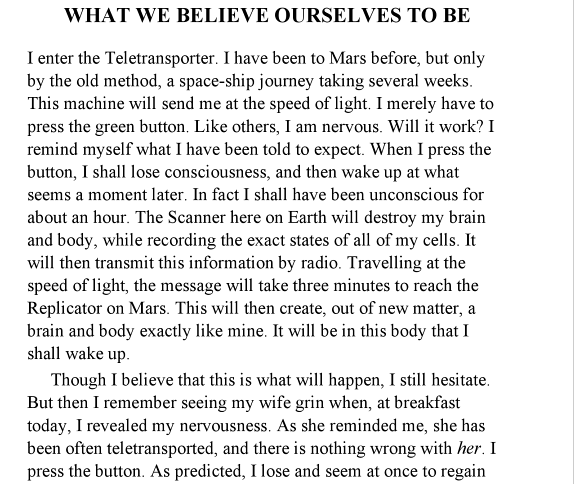 When I started to get serious about philosophy and together with a friend, while still studying on the undergrad level, was invited to attend the "higher seminar" of practical philosophy in Stockholm, Reasons and Persons had just come out and was the topic for a term's discussions, and it was refreshing to watch how all of the seniors around were as shaken by the radical and far-reaching challenges presented by that book as I was. A term later, I wrote my B.A. thesis on 25 pages in the beginning of the book, where Parfit defends a theory of practical rationality that allows for "intrinsically irrational desires" (such as preferring suffering on tuesdays, while otherwise disliking suffering as much as any other one). I was critical of that theory, as I have been of much other of Parfit's own philosophical claims over the years, for instance in my extensive use of his seminal analysis of the morality of creating and influencing future people taking place in part four of the book for the purpose of explicating a consequentialist theory of the morality of abortion in my Ph.D. thesis. But the great thing about Parfit, is that he is not the sort of philosopher whose value is found in him "being right" (or, as is usually the case with such specimen – wrong) – it's rather the way in which he is often able to demonstrate that most of the things we have been taken for granted as obvious or unproblematic must, in fact, be rejected and new, hitherto unknown, answers must be sought out in a project forcing us to rethink just about everything.