I'm happy to announce the publication of a new article, available for free download and reading online, that presents a novel framework for systematic identification of ethical aspects in so-called Health Technology Assessment (HTA). This is the organised and systematiced discipline of assessing the evidence for the value of new treatments and methods for health care purposes (pharmaceuticals, new procedures, technical tools, diagnostic tests, and so on). The idea of having ethical issues integrated into such assessment has been seriously discussed for about ten years, and I have the last two of these been fortunate to take part in a project to this effect, organised by the Swedish national health technology assessment agency, SBU. This work produced a new guideline in Swedish and an update of the ethics section of the SBU method handbook. We then continued to develop a presentation of what we think are both novel and useful results also in an international perspective, which can increase the ambition and quality of attempts to integrate ethical aspects in HTA work, into an international publication, which we are now happy to have out in the International Journal of Technology Assessment in Health Care: 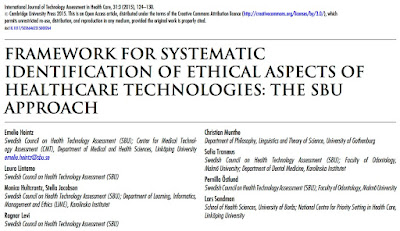 And the abstract runs:

Objectives: Assessment of ethical aspects of a technology is an important component of health technology assessment (HTA). Nevertheless, how the implementation of ethical assessment in HTA is to be organized and adapted to specific regulatory and organizational settings remains unclear. The objective of this study is to present a framework for systematic identification of ethical aspects of health technologies. Furthermore, the process of developing and adapting the framework to a specific setting is described.
Methods: The framework was developed based on an inventory of existing approaches to identification and assessment of ethical aspects in HTA. In addition, the framework was adapted to the Swedish legal and organizational healthcare context, to the role of the HTA agency and to the use of non-ethicists. The framework was reviewed by a group of ethicists working in the field as well as by a wider set of interested parties including industry, interest groups, and other potential users.
Results: The framework consists of twelve items with sub-questions, short explanations, and a concluding overall summary. The items are organized into four different themes: the effects of the intervention on health, its compatibility with ethical norms, structural factors with ethical implications, and long term ethical consequences of using the intervention.
Conclusions: In this study, a framework for identifying ethical aspects of health technologies is proposed. The general considerations and methodological approach to this venture will hopefully inspire and present important insights to organizations in other national contexts interested in making similar adaptations.


The article is so-called open access, meaning that it can be freely downloaded and read online by anyone. You are also free to re-use, distribute, and reproduce in any medium, provided the original work is properly cited. Find out more here or download the pdf directly here!


Back from summer holidays, I was greeted by what has seemingly been the big news in bioethics this and the last month: Steven Pinker's article in the Boston Globe, where he tells the field of bioethics and bioethicists to "get out of the way" and stop debating new technologies, such as the CRISP/Cas9 "genome editing", which I commented on earlier this year – seemingly because Steven Pinker himself has already done all of the bioethics needed doing on this and related subjects (apparently by saying that these technologies will become very good, albeit we don't know much about them yet). That is, he seems at first glance to be performing the very act he urges so strongly against: doing some (rogue elephant) bioethics in this sacred area and, in effect, revealing himself as a ghastly closet bioethicist – who, according to his own logic, should then get out of the way, I presume.

But this is not the end of the folly of Pinker's article, as he seems to be confusing a great number of things, such as bioethics (the academic field where various aspects of bioscience and biotechnology is debated and probed in ethical terms using intellectual tools of moral philosophy and social science), legal and semi-legal regulation of science and technology (adopted by governments, international bodies and professions to control how new ideas and gadgets are introduced and used), and the idea of a temporary moratorium on particular applications of new technologies while exploring them further in more controlled settings (like the  1974 Asilomar consensus on recombinant DNA technology) decided not by bioethicists, but by the concerned scientists themselves – albeit based (one presumes) on views on bioethical issues. Read my distinguished colleagues Richard Ashcroft, Alice Dreger and Julian Savulescu, who I admire for their extreme charity and patience, in turn pointing to several others, to unveil many more subtle incoherent twists apparently resting inside Pinker's stinker, and how these, at the end of the day, leaves him even worse off in terms of  consistency than what the initial impression holds out.

On my own part, I can't free myself from the reflection that if there is one bioethicist who really should get out of the way, it is the one who thinks that the fact the he/she has formed an (no matter how badly argued) opinion on something is a reason for others not to voice and argue their own.