Time once again to make a bit of a summary for this blog during a year which will soon end – last year's summary is here.

The trend mentioned last year of a seemingly (after my recovery from illness) continuously increasing popularity (in terms of reads) seems this year to have initially continued and then leveled out somewhat after last year's extremely positive surge. The monthly figures have in 2013 been residing rather steadily between over 6 000 and over 9 000 reads, with 9 549 as the top figure for September and today the total number of reads ever passed 188 000. There will, however, be a notable dip in reads for this the last month of the year, as with a few days left the figure is still only at slightly more than 3 600 (click the image to see a larger version).

I have also noticed a tendency of a less secured minimum number of monthly hits during autumn, although I've had a few posts that have attracted more than the average attention to make for good monthly figures in the end. A main explanatory factor for this development, as it seems, is that Blogger has chosen to move its Blogs of Note page, where Philosophical Comment has been featured and thus widely displayed at the top since August 2012, into archive mode, favouring instead the increasing integration with the Google+ platform and its blog function. During the year, I've also – albeit with some reluctance due to my dislike of the increasing dominance of Google and what that means to make for a less dynamically evolving internet – finally chosen to integrate Philosophical Comment with Google+, although much remains to be done on that front to have impact on read numbers. I have to say, I do prefer to have the quality and attraction of posts to determine readership over strategic marketing tricks like these. But I can't deny the world around me, so here we are, we'll see next year if I managed to conjure the energy to maximize exposure in this new environment, or found the time and inspiration to post more regularly.

So, over to the posts themselves. This is the all time high statistics of the blog so far (click the image to see a larger version): 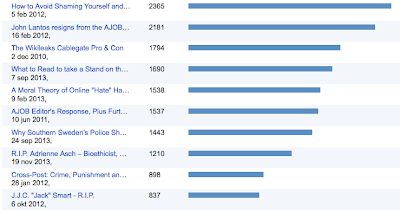 Compared to last year, some significant changes have occurred. First, after several years at the top, the WikiLeaks piece is now third, with my musings over various less impressive sides of the new online landscape of academic publishing is at the top. There are still a few posts connecting to my comments on the many strange moves connecting the the management of the American Journal of Bioethics up there, but as that affair is now a thing of the past, I expect these to gradually be pushed down and eventually off the list by fresher and more relevant material. A few posts that made last year's all time high list have been so pushed off, to be replaced this year by a rather sarcastic piece commenting on a scandalous and eventually officially declared unlawful police registry of roma people in south Sweden, a lament over my academic colleague Adrienne Ash, who sadly passed away this year, a brief pointer to a post by my colleague Udo Schuklenk on his Ethx Blog regarding how to reason around the idea of a military intervention in Syria and, finally, a cross post and referral to a nicely indexed eminent series of posts on moral responsibility, free will and such matters by John Danaher on his Philosophical Disquisitions blog. Not that John really needs the assistance, but I'm nevertheless happy to have been able to thus helped a few people find their way to one of the better philosophy blogs around. Off the list fell, most notably, my comment on how to assess the possible criminal insanity of Norwegian mass murderer Anders Behring Breivik. It may also be noted that while last year it took about 650 reads to make the list, a post this year needs to get above 840, another indication that the leveling out of reads numbers mentioned above has more to do with a less stable minimum than decreased numbers of the top hits of this blog.

Finally, as tradition dictates, a look at the geographic source of the total readership (click the image to see a larger version): 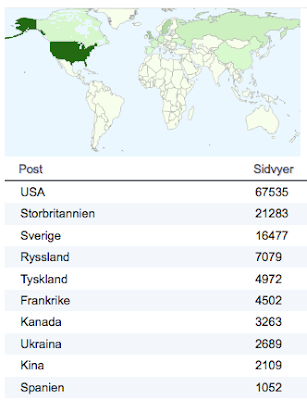 The USA readership is increasing its dominance further, and in all the main reader of Philosophical Comment continues to be anglophone or European, although China has this year made the top ten country of reader list. The full span of the geographic home of readers, however, is better displayed by this image from the ClustrMap function attached to this blog (where larger red markings indicate a larger concentrated number of unique readers of the blog – click the image to see a larger version):

This function displays statistics starting later than Blogger's own, and also counts only unique hits on the entire site (thus not number of readers of individual posts or number of reads). As you can see, Philosophical Comment has a notable readership also in South America, Asia and, albeit still weaker, throughout Africa. Go here to inspect the numerical relations in more detail!