As you may imagine, the research ethical and misconduct scandal around Paolo Macchiarini's surgical experiments at the Karolinska Institutet (a radio summary is here, text ones are here and here) has been a big deal for anyone engaged in bio- and research ethics in Sweden the past year. But not only here, as Macchiarini has had many international links and seemingly hopped between employers and affiliations all over the place for many years, where he has inspired others to work with similar techniques as himself.

Now, some of these people and institutions apparently do all they can to wash their hands free of any Macchiarini-stains, attempting to suppress and silence any public mention of the past associations and stall potential inquiries, especially to impede them to stimulate big news media to take an interest. Possibly for short-sighted reasons of protecting reputation, but possibly also for the reason of preventing more in-depth investigations of research ethical breach, possible scientific misconduct or, as has happened in the Macchiarini case, violent crime. Actions taken usually include unwillingness to share relevant documentation with external inquirers, or refusal to answer their queries, thus undermining the basis for objective public reporting. Lately, however, some have escalated to aggressive legal actions against inquirers, in order to threat them with financial damage to have them stop reporting and even to withdraw already published material. The rationale of such actions is, of course, not to establish wrongdoing or actual libel (that would take years of legal procedure all the way up to the European court of human rights), but to strategically use the law to construct a financial threat that already at the preliminary investigation and  hearing phase undermines the practical possibility of further critical inquiry, as the very economic cost of the legal process itself (regardless of its outcome) will often be impossible to bear for independent inquirers. This, of course, adds to the reason of the tainted researcher to have the tooth paste back into the tube before Big Media gets a whiff, as those would have the financial muscle not to be liable to these kinds of bullying tactics.


A recent example is the German team of Thorsten Walles and Heike Walles (formerly Mertsching) at the university hospital of Wurzbürg, who have recently taken action against critical science blogger Leonid Schneider, who runs the blog For Better Science. Citing their fundamental legal right to be able to freely use their talents ( ≈ pursuit of happiness) – in this case meaning, having successful scientific careers, being able to have better salary, accrue research funds, get new jobs, etc. – they have demanded that Schneider stops reporting about their past experimental trachea transplants, and also won an emergency court injunction that threatens Schneider with jail unless he removes a section of a Macchiarini-report, where the link to the Walles-team is made explicit, and to pay the legal fees for the process leading up to this result. The court order has been made without any hearing of Schneider's side of things, and this is apparently (possibly) OK under German civil law, as he has the right to appeal (provided he can raise the money to pay a lawyer). Schneider has, of course, accepted the injunction and removed the paragraph awaiting an appeal, as can be viewed in this updated version of the original post (linked above), with the relevant section as screenshot here (double click to enlarge): 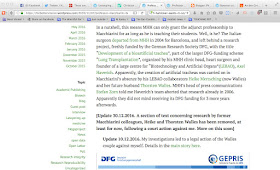 The original section (cashed here) looked like this (the removed paragraph highlighted by me): 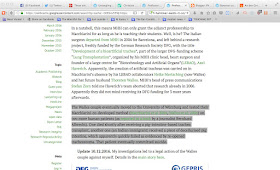 The action has been discussed extensively in a Twitter thread, to be found here. There, among other things, it is made clear that the Walles trachea surgery experiments – like those of Macchiarini – have been retrospectively found to be against European regulation. Moreover, it seems that the information that the Walles so desperately want to be removed from public view is essentially already available for any curious German, through the book Patient meines Lebens – Von Ärzten, die alles wagen by prized journalist Bernard Albrecht, cited by Schneider in his blog post.

I can, of course, acknowledge the vested self-interest of the Walles to suppress publicity around their past Macchiarini-association, and the fact that they apparently have performed very similar type of irregular trachea surgery experiments as he did at the Karolinska. However, it is clear that there is an overwhelming public interest of having this information publicly available – not only in Germany, but internationally; for potential employers, funders and – not least – patients, who have every right to avoid the risk of consulting a doctor that may make them into guinea pigs in irregular experiments.

Had the Walles acted out of honest and honourabe scientific and medical professional motives, they would, of course, have seen to this themselves long ago, initiating and welcoming transparent inquiries and press reporting the very minute that the Macchiarini scandal emerged. Instead, they have done their best to blinker the public and has, ultimately, resorted to petty threats against those trying to make public the professional actions for which they are, without doubt, responsible and which there is an overwhelming public interest in having open to public view. This course of action, especially the court order to Schneider to censor his past posts, makes it highly likely that this is the path they will continue to thread. Leonid Schneider will undoubtedly do his best to fight back, but as the basis here is financial muscle, not moral or legal righteousness, it is unlikely that he will be able to (afford to) prevail, and the Walles of course know this. Here are the actions those who disapprove of this development can take to make their dishonourable actions moot:

1. Continuously report in social media about the Walles' legal bullying of Schneider (and others), taking every piece of news about the processes as a reason to recite the details of their Macchiarini-association, their experimental surgeries, etc., thus keeping this information in the public domain.

2. Link to existing cashed versions of the original reports. However, it is likely that the Walles will take action to have these scrubbed, so therefore it is also desirable to:

3. Reposting the original, uncensured blog posts on public Google+ and other pages, blogs, etc. I have done so here (uncensured Macchiarini post), and here (detailed post on the Walles history of human experimentation).